Like many other things in my life, this post is long overdue. Trying to clear my backlog of posts now :) 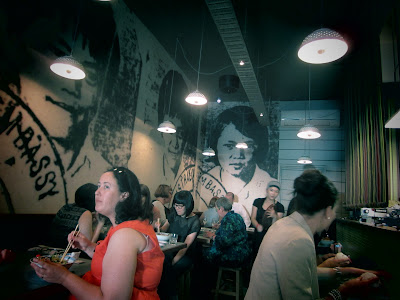 But anyway, a few weeks (*ahem* months) back, I FINALLY had a reason to check out Miss Chu's. Being a mere stone's throw from where I live, it's quite surprising that I never ventured into this little so-called tuck shop that has been much talked-about in the Melbourne food circles.
The shop itself is very quirky in a classic, olden-day, Vietnamese fashion with large monochrome pictures plastered over the walls, little wooden stools and tables filling the space, and dome shaped light hoods swinging lazily from the ceiling. The outdoor eating area at the front of the restaurant is also a very nice place to sit and enjoy a meal, weather permitting.
The ordering system is fairly unique to this part of the world - you indicate the number of serves of each item you would like on a little "order-form" and pass it to the waiter when you're done. It's fairly non-intrusive which might appeal to some people. I personally don't mind either way, as long as my orders are noted correctly!
Started off with the rice paper rolls that this place is apparently famous for. We had the roast duck and banana flower rice paper rolls ($8 for two rolls). It was served in a little cardboard take-away container with dipping sauce in a little plastic bottle on the side. Interesting... Would've preferred having it served the usual way, i.e. on a plate, but this wasn't too bad. The rice paper rolls themselves were tasty, but could've had more duck in them - it seemed like it was packed with lots of vermicelli, some vegetables and herbs, and a sprinkling of duck. I may be exaggerating slightly here, but I was quite disappointed at having been charged $8 for 2 rolls that had barely any duck in them. Tsk tsk tsk.
To drink I ordered the genmaicha (green tea with roasted brown rice), and my dinner companion ordered an interesting shaved ice drink with coconut, banana and mint... LOVED my genmaicha, but thought the other drink was a bit of a weird combo.
Next we had the Traditional Pork Hanoi deep fried spring rolls. These were soooo yummy! I actually ended up eating them with with the dipping sauce we were served for the earlier rice paper rolls, rather than its intended dipping sauce, coz I liked the first sauce more. Bite-sized rolls that seemed to be singing in their wonderful, golden, deep-fried glory.
After we had the Prawn and Crab Net spring roll warm vermicelli salad. This was definitely the highlight of the meal (once we'd added some extra diced chilli in). Sweet dressing, crunchy and fluffy spring rolls, soft vermicelli, fresh salad leaves, diced chilli, and fried garlic - the combination speaks for itself.
All in all a pleasant dining experience. The food could've done with a bit more punch though - it lacked the massive explosion of flavour found in other Asian eateries. But that's my personal preference.

On a later visit, I tried the young coconut juice - it was a truly authentic South-East Asian experience, albeit served in a plastic cup instead of the traditional coconut. Definitely worth a try!