So I was craving some home-style deep-fried eggplant like my mom used to make. Being in Melbourne, far away from anyone who could/would make it for me, I endeavoured to make some myself :)

I loveeee lebanese eggplants - bought some from Woolies a few days back. Yummay! I also happened to have some spring onion shoots and half an onion rolling around the vege compartment in my fridge. Perfect :) My mom never used spring onions in her version, but I figured that I might as well throw them in to add some colour and extra flavour to the dish.

So about 30 minutes later (I'm still quite slow in the kitchen!), my eggplant dish was finally ready. Taste test: It tasted pretty darn good! (Phew) I ate is with steamed rice, but it should taste pretty good with any type of bread or couscous as well. And it will be a really good side dish to be served with lamb curry (or lamb kebabs, or lamb anything!). Lamb and eggplant seem to go so well together! 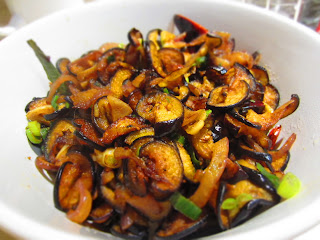 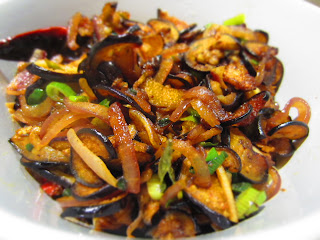 Indian-style Deep-fried Eggplant
First, I soaked the sliced eggplant in a bowl of water with about 1 tablespoon of salt in it - this prevents the eggplant from discolouring and also makes the eggplants less bitter. I left it to soak for about 20 minutes while I sliced my onion, spring onions and garlic.

Then I drained the water from the eggplant bowl and threw in the cumin, turmeric and chilli powder and gave the concoction a good mix to coat each piece as evenly as possible.

Deep-fry the eggplant in batches (note: overcrowded wok = soggy eggplant) and set it aside - you know it's fried when it turns a golden brown.

In a separate frying pan over a medium fire, with a teeny bit of oil, I fried the dried chilli and curry leaves till fragrant (about 30 seconds), then threw in the garlic and onion and fried them for 3-5 minutes until soft and just turning a nice golden colour.

I then threw in the spring onions and fried the mixture a little bit more (about 2 minutes), and added the eggplant back into the mixture. Stir for a few more minutes, and voila! The dish is ready :)

And then the best part - serve and EAT!