It's actually at a corner!

(I only figured this out as we were leaving the cafe.. Brilliant minds can be a bit slow sometimes...) 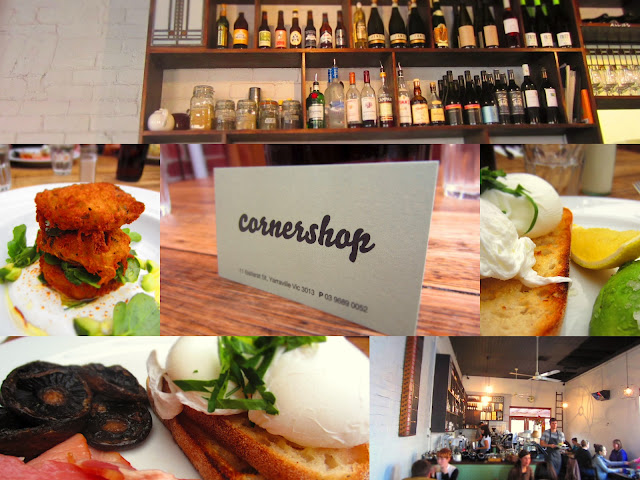 It was MK's turn to choose a place for our next BC meeting and having a friend who calls Yarraville home, The Cornershop was suggested. Being a bit of a noob when it comes to suburbs other than South Melbourne, North Carlton, North Melbourne and a select few others, I hadn't realised that such a quaint-sounding suburb even existed! Well, I should have known better. Yarraville is the epitome of trendy suburban Melbourne. Its main street is packed chock-a-block with all sorts of weird and wonderful-looking shops, the roadways lined with cars on either side, leaving just enough room for only 1 car to drive through at a time... (wait for it...) on a TWO-way street!

And so fate would have it, that just as DS and I were trawling through this treacherous narrow twig of a road space thing, we came face-to-face (as close as road vehicles go) with a giant Land Rover! Seriously?! Yes, apparently so.. So after some nifty maneuvering by DS, we finally managed to get past and drove on to find a parking spot.

BC newcomer AA was at hand to get us a table. What a chilly morning it was! AA, DS and me waiting at the corner of The Corner Shop, shivering in anticipation of our 3rd BC escapade (and also the cold). Oh what fun. There was however, a very cute beagle puppy that made waiting outside so much more bearable. It was absolutely adorable! But was unfortunately whisked away all too quickly by its owner who expertly packed it into the lower rung of his baby's pram! Yes, the little beagle puppy has its own little pram spot. I nearly exploded from the cuteness of what had just unfolded before me.

We were soon joined by good 'ol BL, all smartly dressed, looking like a local who had just strolled down to the cafe for his regular cup of coffee. And then we were given a table! Yes, finally.

Our table was around the back, in a very interesting enclosure that consisted of timber columns and beams supporting a frosted roof and transparent plastic walls. It felt like were outdoors, but not really. I thought it was pretty cool. The inside is quite different in that it has a bit more of an old school charm - perhaps it was the wooden shelf behind the counter, lined with bottles and jars that made it feel so (or the ladder leaning against the back wall, or the ceiling fans hanging from the dark timber ceiling, or a combination of all of the above..). Yes, I will stop my (somewhat poetic) rambling now.

You must be waiting to hear about the food.

Ok, so about the food:

I ordered myself the (erm...) potato cake thingy on some yoghurt other thing, and I think there were tiny bits of cucumber in there somewhere? Definitely drizzled with olive oil... Yes, I have left this post for too long, and alas have forgotten the name of the dish I had ordered! But all's good - a picture does paint a thousand words. So I shall say no more about this dish of mine, and let the pictures do the talking. Hah! 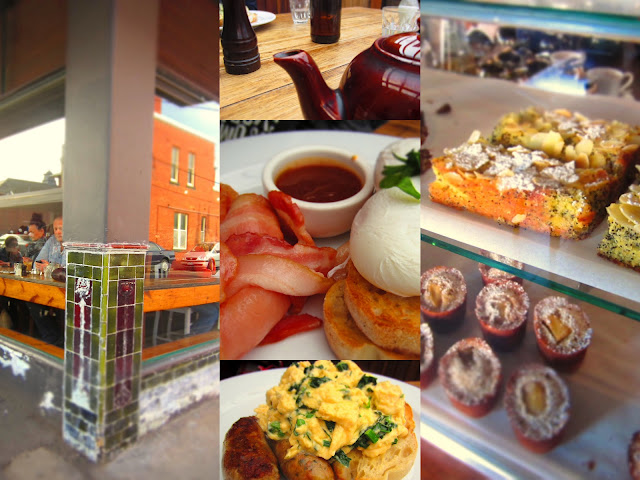 'Twas a nice meal indeed - and good service too. I was happy. And relaxed. And full. And so were my fellow BCBs.

And so, with our hearts warmed, and our bellies filled, we made our way out of this precious cafe, back to where it all started - the corner. And it was at precisely at this time that it occurred to me why the place was named so.

And with that ended our 3rd BC meeting. More fun times ahead!!

BC meetings have been put-off for a while due to my musical commitments, and the fact that everyone else seems to have something on on Saturday mornings. Those social butterflies.

But they will be back soon :) Hopefully in 1 month or so. The 5/6/7 of us will be gathering to share our love of Melbournian breakfasts once more.

But until then, more random blog posts :D

A few weeks ago, I was chatting with a few friends and recounting my dining experiences at the restaurants that previous seasons of Masterchef had opened my eyes to. Being completely objective on the matter, I had to admit that most of those experiences had failed to meet my expectations. Expectations that had been built up by watching the famed chefs of famed restaurants cook on the oh-so-popular Masterchef, be it the celebrity chef cook-off, or an Adriano Zumbo-style "replicate my amazing 8 layer vanilla cake" challenge.

There was The Press Club - I was pretty impressed by it the first time I was there. I had lunch there with my aunt and uncle, and I remember the lamb dish where each bite was like a little mouthful of heaven. This was in 2009, i.e. pre-Masterchef. Post Masterchef, I would be lying if I said that I was blown away by my degustation meal... It was really tasty and well-presented, but somehow just wasn't quite the nearly life-changing meal I was expecting it to be. And yes Masterchef is to blame for this. Don't get me wrong, I love watching Masterchef, as I do any other good cooking show. But this show really built up my expectations of what amazing food would taste like. And the reality of the meal just didn't match how I had imagined it would taste.. For those who don't know - George Calombaris, one of the Masterchef judges, is the owner and head chef of Press Club. Press Club was featured in a group challenge on the show in 2010 where contestants had to prepare the degustation menu for the re-opening of the restaurant. The food looked a lot tastier on TV...

The other restaurant that surprisingly didn't quite meet my expectations was Quay in Sydney. Best restaurant in Australia and some amazing organic farm up in some hill/mountain where they get their fresh produce from, I was expecting a van Gogh-esque experience of culinary art. Didn't quitee meet the mark there. Sad, but true. The food was amazing, but was let down by little things that I was surprised a place like Quay would have overlooked. There were a few very strong tasting pieces of tuna sashimi in one of my dishes, I had been expecting each dish to knock my socks off - but the explosions of flavour were more Molotov cocktail than nuclear bomb.. Underwhelming. I had the famous guava snow egg desert that became famous for being the ultimate final challenge on Masterchef - it was amazingly tasty, but the meringue had a flat egg white taste that didn't appeal to me. My baby cousin's banana porridge probably has more flavour.

Now I know that you must be thinking "wow, those are some crazy expectations!", but hey - I only built them up to be what they were based on what I saw and heard on TV... Can you really blame me?

The point of this post isn't to complain about each and every flaw in these restaurants' dishes, it's just me voicing my thoughts on how our expectations can be inflated so much by what we watch on TV.

Having said that, you will be glad to know that as a result of this philosophical exercise, I now know not to let my expectations build up too much. Food is food - it may look amazing on TV, and the TV people may talk them up to be the amazing concoctions that they may potentially be, but I'm not buying half of it until I've tried the food for myself. Hah!

Also, it is important to note that these expectations that I refer to in this post are only in relation to certain fine dining experiences I've had. Give me a good ol' Malaysian char kuay teow from the road-side hawker any day and I will not even think of complaining. Street food is gooood - cheap, simple, and packed with flavour (and also some other ingredients best left unknown..). It's the expensive stuff that I reserve my harsh judgement for.
Posted by shobana s. at 5:31 AM 1 comment: