Taste of Melbourne kicked-off on Thursday, 15 September. It goes on until 18 September (Sunday) and is being held at the Royal Exhibition Building in Carlton. Such a pretty venue!

With Rachel's trained bargain-hunting eye on Groupon, we had managed to secure 2-for-1 tickets so entry was only $12.50 as opposed to the full price of $25 ($30 if you buy your ticket at the door). Win! Had to buy some 'Crowns' to spend on food inside the place. 1 Crown = $1. I personally think it's a bit of a waste of paper, and a bit mean because you might have extra Crowns left over and nothing to use them on. But it's probably done this way so that the organisers can keep track of the sales and performance of each participant in the Festival. That's my guess..

It was a Friday night that we went - 16 September, between 6pm and 9:30pm. The whole place was packed! And there were many booths that were serving cocktails and other alcoholic beverages, so there were a few tipsy people stumbling around. But overall, still a fairly maneuverable place - with sufficient dining space to sit down and consume our food purchases. Overall, the food was of fairly well-prepared in terms of taste and presentation - some were better than others, but given that the restaurants in the festival had to cater for the masses, it was a pretty good compromise between mass-production and quality.


We started off with food from The Millswyn. Rachel had the 10hr braised beef cheeks with beetroot, spinach & field mushrooms (12 Crowns). Rachel said it was a bit weird eating beef at room temperature - but she did think it was tasty. Chris had the Cured Regal King Salmon with pickled daikon, lime and vanilla cucumber (10 Crowns). It was very tasty, fresh salmon, lovely delicate flavour from the curing, and the dressing and pickled daikon went well with it - Chris really enjoyed it. I got the dessert - Peanut butter parfait sandwich with raspberry jelly (8 Crowns). It was very tasty, albeit small in portion size. It was served with raspberry jelly and salted caramel paste on top of it. The flavour and texture balance was definitely there sweet with salty with tangy, soft with crunchy.

We had all this while sipping mojitos! Rachel thought it was a bit strong, but I waited for the ice in mine to melt a little so when I drank it, it tasted pretty good to me.

Next we tried the Libertine & Le Traiteur 'restaurant'. Chris had the 'Terrine du porc', pressed terrine of free range pork & veal, toasted brioche & dijon mustard (8 Crowns). She said it was pretty good - the brioche was a good touch. I had the 'Toulouse cassoulet' which was confit duck (I lurrrvveee confit duck), garlic sausage & white beans (10 Crowns). The duck and sausage were very tasty. But I had to add some (Murray River) salt to the beans to enjoy it properly. Rachel didn't have anything from here because she was running out of Crowns and had gone to find more...

She did however come back with more Crowns, and food from the Esposito & St Peter's booth - Fondant de chocolate with Earl Grey jelly (8 Crowns) and Carpaccio of farmed Barramundi with peas, mint & wasabi sorbet (10 Crowns). Chris and I tried some of it the fondant. Sooooo yummy! The fondant wasn't really a fondant, more like a very dense version of a dark chocolate mousse. But that combination of rich, smooth chocolate, Earl Grey jelly, and clotted cream was divine. I had to refrain from eating the whole thing before Rachel did! Rachel said her carpaccio was good - I tried some and agreed.

After we wandered around more, sampled a few random things from the stalls, Rachel and Chris decided to try the Botanical wagyu beef burger (12 Crowns). I had the Turkish lamb dumplings, garlic yoghurt, sumac and dried fruit (10 Crowns) from St Katherine's. I was lucky enough to have my order taken by none other than Shane Delia!! Too shy to ask for a photo, I left to join Rachel and Chris, still slightly star-struck :p The wagyu beef burger was apparently not as good as expected - tasty, but I think Rachel and Chris had expected more. My lamb dumplings kinda grew on me. The first bite was a little confusing - I wasn't used to discovering the stringy texture of lamb within a dumpling. These dumplings were made with pasta skin, rather than the Chinese-style dumpling skin. But as I ate more of it, the dish grew on me - the yoghurt was a good complement to the dumplings, and the sumac added just the right amount of spice as well. In the end, I decided that I actually really liked that dish. Oh and I also liked that the dumplings were bite-sized. So cute!


Then we wandered around more, and stumbled upon a cooking demonstration by the chef of the European, Ben Keal. He showed us how to make Regal King Salmon fishcakes. It was quite fun to watch a real chef give a live cooking demo :) And we got free copies of this month's Gourmet Traveller!! LIKE :) 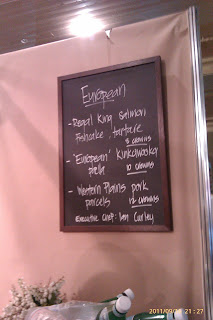 After that, we decided to check out the real fishcakes at the European's booth. And since it was close to closing time, we got them for free! I grabbed a serving of the paella as well - called 'European' Kinkawooka paella after the place Kinkawooka, where the seafood in the paella is from. Good fresh mussels! And yummy prawns, I liked the paella. Just wished the rice had been a little less cooked. The fish cakes were very crispy on the outside (they'd been double-crumbed). But it was served on a pea puree, and I hate peas. Rachel and Chris agreed that the puree was good to balance the saltiness of the fish cakes, and the tartar provided the much needed tang. Pretty good for free food ;)

Overall, we left the festival with our stomach filled to bursting point, happy with our taste trials and purchases (Chris bought some tea, and I bought a tub of ice cream :p). I'd recommend the Taste of Melbourne to anyone with a love of good food. Wish we'd had more time to try more things!!!

List of things I wish we'd had time to try: