Breakfast Club Diaries Part 3 - No Misses at The Premises 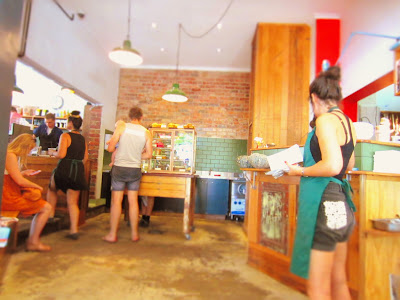 Finally! We have travelled through time from the latest undocumented BC meeting at Two:bob to our most recent one at The Premises in the quaint and lovely suburb of Kensington.

The navigational double-threat duo of MK and me managed to turn what should have been a 10 minute drive from Parkville to Kensington into a 25 minute journey filled with numerous dubious U-turns and other unnameable driving stunts. Ok, so maybe this is an exaggeration - but we do seem to always attract our fair share of misread directions and wrong turns.. Ok, so maybe it isn't an attraction but an inherent snag in our mental fabric. Also, we really didn't expect this cafe to be right across the road from the Kensington train station...

So anyway, finally arrived at (the correct) final destination, and joined DS, AA and BNL at the communal table. This cafe, like Common Galaxia, had a truly intriguing centrepiece in the middle of the table! Think quirky but endearing combination of chemistry apparatus and botany.

EP was yet again missing in action from this BC meeting. But not to worry - he definitely shall be making an appearance at the next one as we have issued him a warning that missing another BC meeting would cause him to lose considerable brownie points (that may one day be redeemable for actual brownies). No, not really - I made that up. But it is never good to lose brownie points. Me and the other BC members can only hope that he heeds this warning.

About the food - I must say that I like the presentation of the dishes at The Premises the most out of all the breakfast places I have been to (except for perhaps The Hunter at Twenty and Six Espresso in North Melbourne that looks like the movie set from Narnia).

Check out the pics - and yes, the food tasted as amazing as they look!